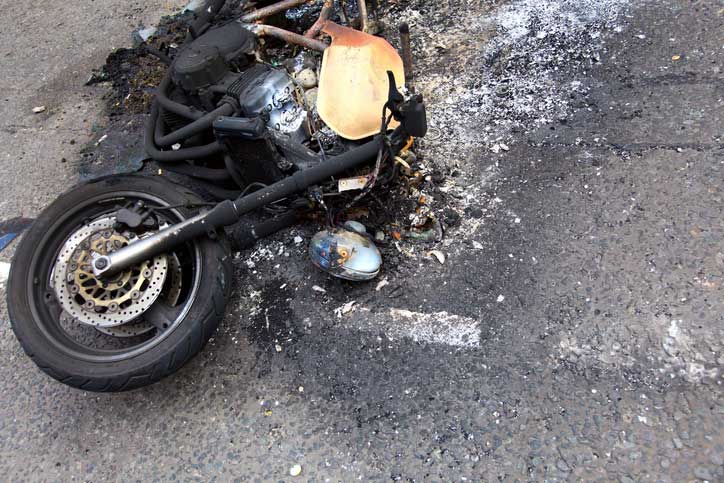 On Wednesday, November 3, at about 10 pm, four vehicles met in a single, horrific crash on I-595, killing three motorcycle riders. According to the Miami Herald, “two motorcycles, a Lexus and an unmarked police cruiser were involved.” The chain reaction collision began when a Yamaha bike hit a Suzuki, “causing their motorcycles to topple on the expressway and ejecting all three riders.” Immediately, “a white 2009 Lexus IS then hit [the] Suzuki motorcycle.” Finally, a Broward County deputy, returning home from a shift at the airport, hit the fallen operator of the Suzuki with his unmarked Dodge Durango.

Killed in the accident were 25-year-old Steven William Shearer and his passenger 28-year-old Cortney Taylor Walters, both of Ft. Lauderdale, and 30-year-old Edward Charles Benway III of Pompano Beach. The Herald reports that “Detectives believe Benway was checking on Shearer and Walters when he was hit by the deputy.” The motorcycles had been traveling at about 65 miles per hour.

The cause of the crash is unknown at the time of this writing. But the tragic accident illustrates the danger of chain-reaction crashes on busy, high-speed arteries, such as I-95 and its extensions. Miami-Dade is the leading Florida county for auto accidents, but Broward County is a close second. In 2018, Broward recorded 40,724 total crashes and 204 traffic fatalities, second only to Miami-Dade.

Florida Counties with the Most Car Accidents

The deadliest roads in Broward County

Broward County also ranks second in the state for the number of deadly road segments. Broward features 14 stretches where accidents occur far too frequently. Here’s a list of the worst offenders:

Drivers should take extra precautions when on these roads, and motorcyclists might choose to avoid them altogether.

Why are Broward County roads so deadly?

Broward County experiences more than its fair share of accidents, and the reasons are fairly clear:

An improved economy in recent years has also contributed to the rise in accidents. More people working means more commuters on the road. And when people have money to spend, they’re more active, so they’re out driving in the evening as well.

Tips for staying safe while driving in Broward County

Every driver has a part to play in reducing the incidence of traffic accidents. You can do your part by:

Accidents, such as the one reported above, shatter the lives of countless people. We all have a duty to ourselves, our loved ones, and the strangers we encounter on the road to drive with caution.